From Shinya Mizoguchi’s powerful original score, inspiring music from taiko group M’s Japan Orchestra, and intense opening song from rock musician Okuda Tamio to the finessed layers of thousands of audio files managed by post-production sound mixer Ben Chan and Q-Tec’s Akira Osabe, sound production is perhaps the most undervalued yet most important part of not only Pray for Japan but any film production. And because of Nihon University College of Art, Department of Cinema’s Izumi Kamikura and her team we were able to complete our stereo and 5.1 channel final mixing on an incredible theatrical sound studio. Of course, Nori Waki for the first three weeks and local Ishinomaki student Hiromi Ujiie were the key sound people on the ground in Tohoku recording the dozens of hours of interviews and events. We were truly blessed with a dedicated and talented team of volunteers. 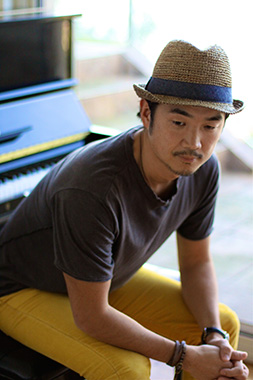 Pray For Japan is Mizoguchi’s first motion picture score. Mizoguchi records as starRo. Mizoguchi is a Composer, Producer, Guitarist, Keyboardist based in Los Angeles, CA, US. Mizoguchi was born and raised in a musical family where his parents are both jazz musicians, he naturally developed his interest in playing and composing music.

Living in many different countries like Japan, the US, Australia and Singapore, he was exposed to a wide variety of cultures which provided a strong influence on his genre-blurring music style. 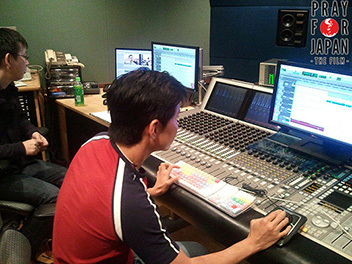 Chan has been doing work as a composer, sound designer, musician and all around good pair of ears to have around since 2000. He has his own firm, New Music Unlimited, which has a long history of working on projects with Stu Levy and TOKYOPOP.

Chan did the post-production audio mix and sound design for Pray For Japan working both in Los Angeles and Tokyo.