In a small but not uncomfortable office in the “Media City” of Burbank, CA, a group of editors spent several weeks, under the direction of Stu Levy, turning 4 Terabytes of full HD (1080p/24fps)video into an 88 minute feature film. Since the shoot was done dual-system (separate camera and audio recording device) the video and audio had to first be synchronized. Once that was accomplished, the first assembly edits could be done.

Stu had brought together a remarkable group of people. One was just out of school, another was still at film school but on summer break, and the rest were working professionals who had been editing for years. They took time out from busy schedules and the fast pace of the Hollywood movie, TV and Cable industry to be a part of this documentary.

(photo above: Stu, Nobu and Panchita going over shots)

Editing is painstaking work, and right in the middle of work Stu came back with one more week’s worth of shooting, another Terabyte of HD video data, with new footage having to be balanced with the footage shot back between March and May of that year. Some of it was shot with the need to clarify certain things in the original footage and there was a pre-determined place for some of the segments. But the River Festival footage in particular provided new images that needed to be harmonized with the rest of the film.

One sequence in particular became iconic for the film, alongside the koinobori waving in the breeze: the floating of lanterns on the river that runs through the heart of Ishinomaki. They symbolize the spirits of honored ancestors, and also the thousands who had lost their lives in the tsunami. You see the lanterns floating in the final poster image. 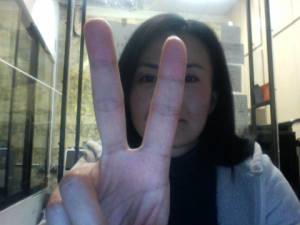 At last, very close to the point at which Stu had to leave for Japan and final finishing touches, the “picture locked” cut was achieved. It was a very proud moment for this band of brothers and sisters to see it as a whole and not as a series of segments one was constantly fiddling with. The goal had been reached. Film school for some and career for others awaited at the end of this part of the journey. But at that point, the editorial team knew that they had accomplished something worthwhile.

I became a part of Team P4J in June of 2011. I had just received a degree from LA Valley College in Media Arts: Post-Production, and when the call went out from Stu Levy on Facebook looking for people willing to help with post-production, I was eager to respond.

My main task was to deal with the grunt work that the editorial team, Emiko, Susumu, Nobuo and Noriko, should not have to mess with. I think I did OK, and got no complaints.

Stu and I have been working together since. I am now working with him on TOKYOPOP projects. and also continued new media support for Pray For Japan. I am also working on independent projects of my own, plus projects that support the people of Tohoku, because their ordeal is not over.

Born in Tokyo, raised in a suburb, Susumu studied film in Boston and discovered the love of editing. His career started in Japan editing commercials, then led to Los Angeles, cutting promos for AOL, Disney & Fox. Eventually he started working on various TV shows and feature films. This is the second feature-length documentary he edited. He is a guild member as well as Film Independent’s Projecct Involve fellow. He lives in Southern California with his wife and a son.