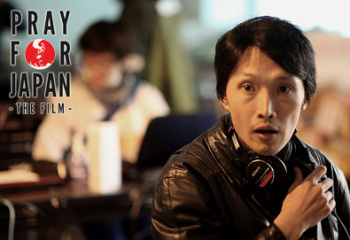 Stu Levy and Nori Waki headed up to Tohoku with Stu’s Canon 5D, Tascam audio recorder, Zacuto rig and MacBook Pro. In Tohoku, there were no accommodations available anywhere near the devastated coastal region. While the non-profit staff and volunteers stayed communal style on tatami mats in rented warehouses, Stu and Waki-san needed dedicated space for the equipment and access to electricity to transfer files every night.

Fortunately, the owners of a few love hotels in Sendai’s Nagamachi area had been kind enough to open their facilities to the non-profit JEN immediately after the earthquake. Those same owners rented a room out to Stu and Waki to house the production. Typically, a love hotel makes its money from “quick turnaround” so dedicating a room to one customer isn’t great business – but this was just one of many examples of the camaraderie we all felt up north. (Thank you “Tarako-chan”!).

Stu’s 6 weeks of filming were divided into 5 consecutive weeks in April and May 2011, then an additional week in the middle of summer 2011. For the first 3 weeks, the “crew” consisted of Stu and Waki. Stu operated the Canon 5D and Waki recorded the sound. During sit-down interviews, Stu would place the camera next to him on a tripod and look at the subject while asking questions and listening to answers. In the field, the two would wander around, filming as they went. (photo: Nori Waki)

To Stu, it was very frustrating to simply film the activities. Volunteers and locals were engaged in soup kitchens, mud-removal, debris removal, and numerous other critical recovery projects. Stu made a point of spending time volunteering, not just filming. After filming a certain amount of coverage, Stu and Waki would set down their equipment and pitch in – carrying provisions, serving food, cleaning. It was a constant fight between the mud (which would get everywhere) and the equipment – the mud typically won. In fact, some of the best moments occurred while the two of them were volunteering – and unfortunately there was no camera rolling at the time. But watching people struggle to overcome such a large-scale tragedy is different from being part of the team struggling together. So Stu felt their volunteer work was critical – not only for their own fulfillment but as a commitment to this team. He believes the many interviews were more honest, open and earnest than they would have been if he had been only a filmmaker asking questions.

A typical day for Stu and Waki would be to wake up at their room in Sendai around 6 AM, grab the equipment and load it up in the car, stop by the local 7-11 to grab coffee and onigiri (rice rolls) to go, then get on the highway for the often 2 or more hour drive to Ishinomaki. The road was crowded with trucks carrying supplies and other vehicles, leading to major traffic jams (and of course the trains were not running into the devastated zone). While driving, Stu would often do conference calls with the TOKYOPOP LA office, discussing with Mike Kiley, Tom Ogawa, and Victor Chin each day’s progress in shutting down the operations. Stu would then go over with Waki the day’s goals – which events were taking place where, who was going to be interviewed, which coverage was needed. Then the boys would spend the entire day driving from location to location, often through run-down streets and traffic jams. They’d film, volunteer then get in the car to the next location. There was mud everywhere and it was often cold but everyone pitched in on all projects. Lunch was typically a small bowl of curry while working at the shelters, or crackers brought from 7-11. As time passed, more shops began to reopen so it became easier to eat food. Filming continued until night, when there was either a meeting of non-profits and volunteers, or some sort of event to attend. They avoided returning to Sendai until after 10 PM because of the traffic. Once they did return, it was typically midnight or later, then it took at least 2 hours to transfer and back-up all the data, allowing for 3-4 hours of sleep per night on average. While the schedule was exhausting, they were always grateful to have a clean bed and hot bath each night – the victims living in the shelter were not so fortunate. This part of the experience gave them a real perspective on life and how we cannot take for granted what we have. 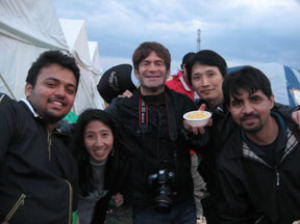 One wonderful part of the experience was the teamwork and community feeling shared amongst the volunteers, victims, and non-profit staff. Typically in Japan, co-workers say “otsukare-sama desu!” (rough equivalent of “nice job” + “what’s up”), but they don’t say it to strangers. However, in Tohoku, everyone said it to each other, whether or not they knew each other. This had a strong bonding effect – as if we were all part of one big family working together towards a common goal. Indeed, this was the situation. Stu and Waki felt honored to be part of that family – and share the “otsukaresama desu!” with the community.

After 3 weeks, Waki-san needed to return to Tokyo, and Stu hired a local college student, who had lost his home, to work with him. Hiromi Ujiie, or “Uji-kun” for short, had never operated sound equipment, but offering even a short-term job to a local victim was a priority to Stu. Waki-san trained Uji-kun before he left and the combo of Stu/Uji took over. Stu learned a lot from Uji-kun about the local perspective on things and they built a strong senpai-kohai (cross between “older brother-younger brother” and “mentor-mentee”) relationship. 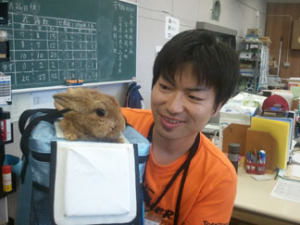 Sometimes they would meet Endo-san, Furuuchi-san (Stu called her “Fruits-chan”) and others for dinner at the reopened Marumatsu restaurant. Stu absolutely loved Endo-san’s rabbit “Cocoa-chan” who is most likely the friendliest rabbit in the world. Stu would buy locally grown carrots and radish leaves for Cocoa-chan to devour. Endo-san would take Cocoa around to the shelters and allow victims of all ages to pet and enjoy her companionship. Cocoa-chan was a true “therapy bunny” and she even gets a cameo in the film!

In early May, Stu felt like he had much of the raw footage he needed but he was missing the key piece to tie everything together. He had interviewed over 30 incredible people, with interviews that averaged 30 minutes each, but ultimately how could he bring it together into one story? Before Waki-san left, he had suggested koi-nobori as a theme. The koi-nobori, carp streamers, are colorful kite-like flags hung high in the sky on poles, houses, and cables. They are typically seen in the early months of the year through Children’s Day on May 5. The koi-nobori represent children, especially sons, and are flown in the hopes the sons will grow up healthy and strong. The people of Tohoku kept their koi-nobori flown high, even during the tsunami aftermath – clearly symbolic of their hopes for a strong and healthy recovery. 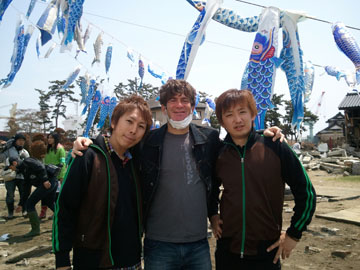 Stu thought about the koi-nobori and did some research online. He discovered that a local high school boy, Kento Ito, was planning a ceremony of koi-nobori donated from all over Japan in honor of the loss of his little 5-year old brother Ritsu in the tsunami. This story was at face value inspirational, but it became magic. Stu found out that the key group helping Kento with this ceremony was M’s Japan Orchestra, a group of taiko drummers and musicians from a nearby village in Miyagi. Stu had met Shu Chiba and Yosuke Ishida at the Takefuku soup kitchen (takidashi) in Ishinomaki when he first decided to make the documentary. In fact, he had a photo of them and had signed their taiko drum! He sent an email which led to a returned phone call from Chiba-san, “Stu, can you come lend a hand?” A few days later, Stu was with Kento Ito and the M’s Japan Orchestra guys – they worked together to hang over 200 blue koi-nobori streamers in preparation for the following day’s ceremony on May 5. The next day many TV reporters came, as well as local victims, and on the grounds of the Ito family home’s ruins, Kento, M’s Japan Orchestra and even Stu raised the 200+ koi-nobori high into the sky. After that, M’s Japan performed a few songs, together with Kento Ito. It was a moving, spiritual ceremony that is memorialized in the climax of Pray for Japan.

The first 5 weeks of filming wrapped on May 14 and Stu first returned to Tokyo, then left to return to his native Los Angeles to edit the raw footage. A few months later, he returned to Ishinomaki to film the famous kawabiraki matsuri (River Festival). The festival in 2011 was going to be dedicated to the thousands of lives lost in the tsunami. Stu flew back to Japan, contacted the good people at the Taroko-chan love hotel in Sendai who once again made a room available to him (there were still no rooms in Ishinomaki available). On this trip, Stu’s good friend Ken Pechter joined him for the week of filming and volunteering.