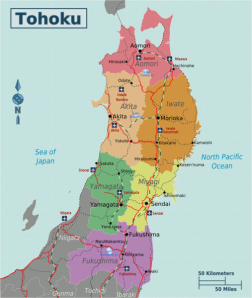 Japan is one of the world’s greatest powers. Because of this, it is easy to forget how small it really is. In terms of square footage, Japan could fit inside California, with room to spare.

Tohoku is the name used for the north-east region of Japan’s largest island, Honshu. It makes up approximately a sixth of Japan’s total area, and is known for its agriculture. This makes the region incredibly important to the nation as a whole because only about a third of Japan’s land is arable, the rest of it is coastline or volcanic mountains.

In the aftermath of the magnitude 9 earthquake off the coast of the Tohoku region on March 11, 2011, a massive tsunami struck approximately 420 miles of coastline and swept as far as 6 miles inland. That’s about the same distance as the stretch of coastline between San Francisco and Los Angeles. The salt water destroyed buildings and ruined farmland. The tremendous wave also damaged as many as half the fishing boats in the area, both those in the ports and those near the coast.

Taken all together, from fields ruined by salt to boats too weak to go to sea, the earthquake and tsunami have had a considerable impact on Japan’s agriculture and fishing. Perhaps even more profound than the actual, physical damage is the Japanese people’s loss of trust in the products of Tohoku.

Immediately following the destruction, the Japanese people worried that food from the affected region would be contaminated by radioactivity. This is in spite of the fact that even the widest-spread evacuation zone around the reactor only encompassed a fraction of the total area affected by the tsunami and earthquake.

The Japanese people also feared that even if the Tohoku products were not radioactive, they couldn’t possibly be as high quality as they were before the disaster. To combat this, many department stores and grocers ran promotional events to try to reassure the public that the food was both safe and good to eat. Even now, the Japanese public is only slowly beginning to regain their trust in the products of Tohoku.