The word “taiko” is a word that simply means drum. There are many kinds of drums in Japan, and they are often played during festivals. In addition to celebratory connotations, drums have strong religious and military connections in Japan. During feudal times, drums were often used to set the pace for the troops and to encourage them. It could be this use that leads modern ouendan, a type of cheerleading done by males, to use taiko.

Taiko also feature in one of the most well known myths of the Shinto religion. It says that once, long ago, the sun-goddess, Amaterasu, became disgusted with her younger brother and sealed herself in a cave, plunging the world into night. Many tried to coax her out, but in the end it was Ame no Uzume who lured her out with dance and music and brought light and warmth back to the land.

Modern Taiko started with a Jazz drummer named Daihachi Oguchi. He, like many of the youth of the American occupation era, embraced Jazz because it had been forbidden fruit during wartime — too “British/American” for the comfort of the ruling powers. He played with several bands and was considered a local star. 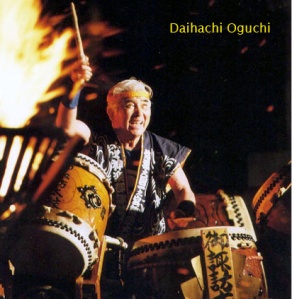 In 1951 Oguchi was asked by a local shrine to interpret some ancient, ritual music. Once he figured it out, he came to two immediate conclusions: the music they wanted him to play was boring, and he had a more interesting idea to play with. He quickly gathered some of his musician friends and created the first taiko ensemble.

Surprisingly, up until then no one had even thought of assembling a team of drummers to do ensemble drumming with traditional Japanese drums. He mapped out the typical Jazz drum kit of the day and related each piece to different kind of drums that were available to him: The o-daiko, the large temple drum, was sort of like the kick drum, or bass drum. The tsukeishime-daiko, a tunable drum with a high pitched, snappy sound, mapped to the snare drum. The varying sizes of byou-uchi-daiko, medium sized drums made from a single hunk of a tree trunk, mapped to the rack and floor toms. A team of musicians would instead play what a single Jazz kit drummer would play using both hands and both feet. It was a very Japanese way of doing things.

Since 1951, ensemble taiko has become a part of Japanese culture and celebratory events. In the ‘60s a whole new aesthetic of drummer-as-athlete fueled famous ensembles like Ondekoza and Kodo. At the same time the ethnic pride movements of that same era in the U.S. fueled interest among Japanese-Americans to explore and understand their cultural heritage. Taiko became a part of that quest.

The ensemble we see in the film, M’s Japan Orchestra, is part of a bigger group of musicians called 3D Factory that is based in Tohoku. Their producer, Shu Chiba, factors into the story of Kento Ito and his family, and he and the rest of 3D Factory helped Kento organize the koi-nobori ceremony seen in the film. Their music is also heard on the soundtrack of the film; and Shinya Mizoguchi adapted themes from their music as motifs in the film score. Their music is a fusion of elements of Jazz, Progressive Rock and even modern Western classical music with elements of Japanese traditional music.

In times of great sadness, people often turn to music for comfort and release. The visceral, primal music of the taiko resonates in a way nothing else can.