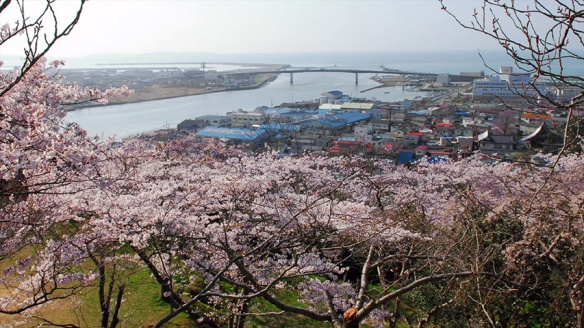 Sakura (cherry blossoms) are a very important symbol in Japanese culture. They are the quintessential image of Spring, blooming joyously and falling in flurries of petals, like snow, just when they reach the peak of their beauty. Because of this, sakura are often associated with both new beginnings and endings. They symbolize, among other things, the ephemeral transience of all things.

Since they bloom from late-March through April, the season when the school year starts and ends, they are connected with school and graduation in the Japanese mind. More traditionally, the beauty and vitality of the sakura has been associated with samurai, and thus also with strength and death.

The use of the sakura throughout the film suggests endings and new beginnings, the opportunity the coming of a new season brings and the bittersweet memories of smiling faces now lost to time.

No, Japan is not the only place that has a Sakura blooming season. In the USA, the Washington DC trees are a living symbol of the special relationship between Japan and the United States, one brought much closer by the events of March 11th, 2011. These trees pictured above are in Beilenson Park, Lake Balboa, CA, and are a special hybrid of the “pink cloud” type bred for hotter climates than those experienced by Japan.